The Vicar Of Dibley (23rd Psalm)

This piece is actually a setting of "The Lord Is My Shepherd", composed for Howard Goodall for choir, organ and orchestra. Featured as the theme music to the TV series "The Vicar Of Dibley", the gentle melody is now well-known.

I've written 3 arrangements - all at the intermediate level and each contains all music of the original (including the bits not normally heard on television)!

Which arrangement suits your ensemble? You can see and hear them all in the links below... 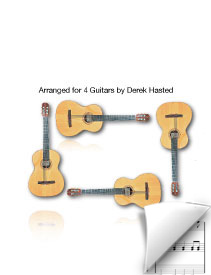 The Vicar of Dibley
Howard Goodall

During lockdown I've been busy producing new and very playable arrangements of contemporary music - this showreel highlights just a few of them...

See my catalogue of downloadable music

News from my Guitar Workshop

Following on from e-recital number 13 we have another new arrangement for you, crafted from soundfiles recorded in Hampshire and Sussex.

Watch the video and play along with us (or sing, if that's what does it for you) - the tune is on the screen - it takes a while to get going, as you'll see...

This edition contains an advanced intermediate arrangement for 4 guitars/large ensemble of the fantastic piece "The Logical Song", written by Roger Hodgson and performed by Supertramp.

This arrangement uses the full range on the guitar from the lowest note right up to the 17th fret at one point! Guitar 4 is slightly easier than the other lines, but stays faithful to the original's bass line where possible. This part is supplied in treble and in bass clef to suit either a classical guitar or a bass instrument.

My arrangement contains the original solo sax breaks, both as played and in a slightly simpler form too which is a bit less frantic under the fingers.

This is just the foot-tapping piece to get stuck in the audience's ears and to be with them all the way home after the concert!

Do That To Me One More Time (Captain & Tennille)

This piece, a US and UK Top 40 hit many moons ago, makes for a great contemporary concert piece.

My arrangements are in the same key as the original and have the same uplifting key changes too.

I've written two different arrangements - which one suits you? You can see and hear both in the links below... 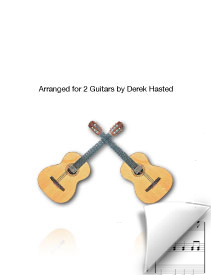 Do That To Me
One More Time

Captain & Tennille guitar duet
Do That To Me One More Time

News from my Guitar Workshop

Following on from e-recital number 12 we have another new arrangement for you,"Last of the Summer Wine", crafted from soundfiles recorded in Hampshire and Sussex.

Watch the video and play along with us - the tune is on the screen! 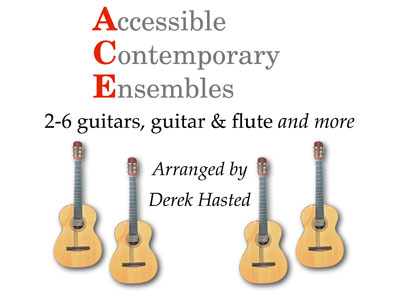 The sales of my downloadable contemporary arrangements is steadily increasing - I have over 150 instantly available arrangements for 1-6 guitars and for large ensembles.

I've added a new page to my shop so that you can browse my music by title (and then click to see more details).

Wishing all you visitors to my website a New Year full of Good Health, Great Opportunities and Fantastic Music!

Let's hope we can get out there and make music for real once more!

I have no vacancies for the Spring Term from January to Easter.

Check out my teaching website for vacancies as they arise.