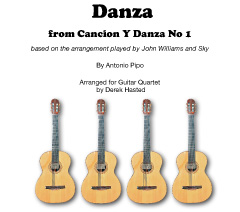 Crafted as a piece for solo guitar, John Williams opens the track on the Sky recording playing the solo version, but quickly the sound is taken over by the rock group.

My arrangement captures almost all of the Sky version, including the electric guitar "break", which is typeset in two different versions - one at pitch, way up the neck, and the other an octave down and in familiar territory.

This piece has featured in the playlist of Hampshire Guitar Orchestra, and a large ensemble can generate a really powerful driving beat.