You are in Derek Hasted > Ground Floor > Garden > Views

This page is a re-write of what was formerly on the Bedhampton Parish website when I was webmaster (2003 - early 2016).

Bedhampton, once a self-contained village, is now part of the ribbon of housing and industry that lines the south coast of England.

Bedhampton in the Middle Ages

Bedhampton has been here a long time! It figures in the Domesday Book, where its name was Betametone.

And it's from the Domesday book we can see that St Thomas, 900 years old, was not the first church here, but that there was a Saxon Church before it.

So let's go back a little further in time...

In 501 Saxons invaded Portsmouth, defeating the inhabitants and taking possession of all the surrounding countryside, including Bedhampton. During the next three hundred years the village must have developed, as records exist that in 837 the Manor of Bedhampton and its lands were granted to the Cathedral Church of Winchester by Egbert, King of Wessex.

During the reign of the Saxon King Alfred, Danish invasions commenced, pillaging the village and laying it waste. Further Danish invasions followed, until all England was conquered, and Canute (sometimes spelled Cnut) was proclaimed King. It was at nearby Bosham, story has it, that he showed he could not repel the sea. Shortly after his death in 1035, Bedhampton Manor was let to Alsi, who held it until the Normans took possession in 1066.

In 1086 William The Conqueror ordered a census of the whole land - the Domesday Book - and under the heading of “The land of St. Peter, Winchester”, Bedhampton has the distinction of a direct mention. The entry states

As time moved on Bedhampton's name changed from Betametone to Bethameton & Bethametona (one source dates this use from 1167 to 1242), and thence to Bedhamton and Bedhampton.

Maps of Bedhampton in the Tudor and Stuart Periods

I am indebted to the Dean of Portsmouth University for giving permission, back in early 2005, to use the following fascinating maps from their website... 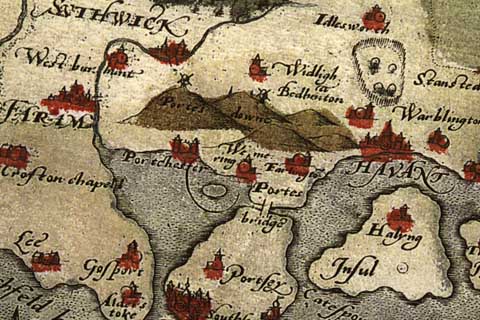 Fareham is shown as FARAM, and Wymering as Wemering.
Widley is Widligh, and Hayling is Halyng. Portsdown Hill is Portes downe 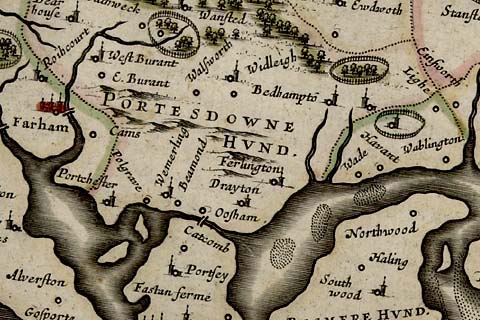 There are many subtle name changes - to Farham, to Haling and to Widleigh, for example.
The Boarhunts are West and East Burant. Leigh Park is Lighe, and Paulsgrove is Polgrave. 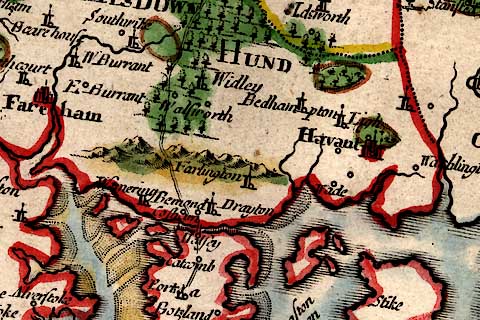 For the last 900 years, St Thomas Bedhampton has stood, braced against the elements, on what was the old road to Portsmouth - now a peaceful backwater lane. If you're interested, come with me on a short photo tour of the Church of St Thomas the Apostle, Bedhampton.

And if you want to know a little more recent local history, come and read the first ever Bedhampton Parish Magazine "Community"

Around the time that the Internet was first finding its feet, the name of Bedhampton cropped up a lot in association with Unidentified Flying Objects. Now relegated to my Museum of old pages, I couldn't resist writing my own Bedhampton UFO page...